Home » Samuel Hahnemann – the founder of homeopathic system of medicine 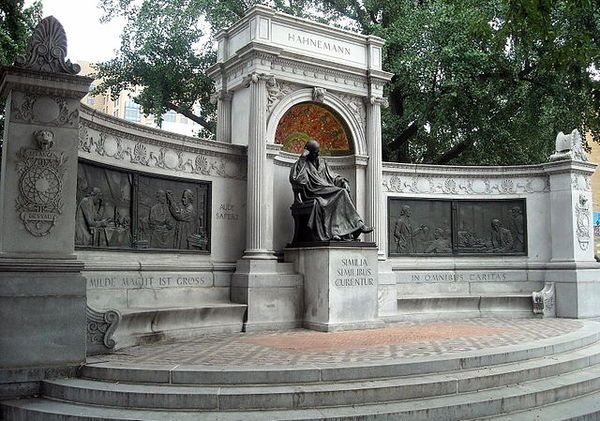 Christian Samuel Friedrich Hahnemann (1755-1843), a German physician, is the founder of modern homeopathy, and 1796 is considered to be the official year of creation of this medical system.

In fact, the origins of homeopathy go much deeper, to the fifth century B.C. The Greek physician Hippocrates, the father of medicine, was the first person who said that ’diseases are not caused by gods or spirits, but are the result of natural action, and the patient must be encouraged to activate its inner healing powers … the disease can be cured by remedies that have similar symptoms’. Hippocrates can be considered to be the true founder of homeopathy, affirming that ‘by similar matters a disease arises and by administering similar things they regain their health from sickness’. Thus, the law of similars was for the first time formulated. Hippocrates invented the concept of ’clinical observation’, which had to be extremely detailed and aimed at drawing a holistic picture of a sick person’. In addition, he put forward the three fundamental directions in the art of medicine: the law of opposites, law of similars and healing power of nature. Unfortunately, these findings were ignored for a long period of time.

Another great proponent of homeopathy was the Swiss alchemist Paracelsus (1493-1541), that rediscovered the forgotten “Greek teachings”. His medical works plentifully confirm the homeopathic nature of his medical practice. He promoted the idea that ‘the healing properties of a plant can be revealed by its outer form – “The signature”. For instance, Chelidonium (Chelidoniummajus) was used to treat liver and gall bladder diseases, because of its yellow sap, which looks like bile. Paracelsus stated that diseases are not caused by mysterious powers, but due to some external factors, such as spoiled food and water. Paracelsus affirmed that all plants and metals have active substances that can be prescribed to treat certain diseases. As a researcher of many substances with healing powers and as an apologist of Hipocrates ‘Similia similibus curantur’ principle, Paracelsus became the key person in homeopathy development. The below mentioned famous phrase belongs to Paracelsus ‘All substances are poisons; there is none which is not a poison.  The right dose differentiates a poison’.

Samuel Hahnemann, horrified by the “barbaric” methods used in those times (excessive exsanguinations, forced vomit inducing, laxatives, which were often lethal for the patient; and the drugs prepared from lead, mercury and arsenic poisoned the patient) was looking for a milder and more human medicine.

Hahnemann performed his first experiments with China barks on himself, then he went on performing experiments on his family members, friends and a group of disciples. Thus, based on the results obtained, in 1811 the “Materia Medica Pura” was published, while the principles of homeopathy were presented in the Organon in 1810. Therein, Hahnemann spoke of Vital Energy, which keeps the balance of the body; and when the stress is too high or too long, or the Vital Energy is deficient, people get ill; similarly, the healing process takes place by a reverse reaction of the Vital Energy, which is stimulated by the proper homeopathic remedy and is proportional to the Vital Energy left in the body.

So, Hahnemann is the rediscoverer of the therapeutic laws of homeopathy, by testing homeopathic remedies on healthy people, taking into account their emotions, mind and body as a whole. Hippocrates, Paracelsus and Avicena have intuited the same thing, but Hahnemann was the one who rediscovered homeopathy and created a scientific system, bringing it to the level of a true art of healing.

Tatiana is a rare gem! Not only does she bring a wealth of medical knowledge to her profession, but she is nothing short of genius when it comes to her ability to assess and prescribe the right homeopathic remedies for any and all health challenges. She’s always helpful. She’s always
…
extremely polite and respectful. She’s very caring and is a wonderful resource to people who want to access her skills for their whole families. I can’t say enough positive things about my many interactions with Tatiana! The only problem now is, telling everyone how good she is, I’m going to have trouble getting into see her!

DS // România
“My children and I know Tatiana, and respectively are familiar with homeopathy, for five years now, since the day I called her in desperation, when my 8 months old daughter was sick for the previous 6 months of her life and under intense antibiotic treatment, prescribed for colds, which my
…
daughter was catching regularly; since then, she had never taken them again, but only homeopathic granules, tasty and easy to use! Any health issues was treated with the help of Tatiana’s magic granules! For this, I would like to thank her sincerely for the help, availability and receptivity at any time of the day! I would also like to thank her for my healthy children, who rarely get sick, and when they do, they recover quickly, thanks to homeopathy. For us, she is our guardian angel and our savior! Although, now she is thousands kilometers away, she never failed to treat us online as effectively as in person!”

CA // Chisinau, Moldova
“Tatiana has helped me substantially that I cannot even begin to appreciate. Tatiana is punctual, warm and kind, friendly and does not judge – she is strictly a professional that wants to help. Tatiana has helped me over the past year with my many – seemingly random – concerns, that
…
turns out weren’t random at all. Homeopathy is wonderful, but it can be a little daunting when it comes to remedies and potencies, and that’s where Tatiana shines! She starts the session by shaking your hand and you can tell the wheels are already turning in her mind. After she has come up with a remedy she is always ready to help and responds to emails within a very reasonable 24-hour period. She has often given me further advice without any hesitation. I have and will continue to use her as my homeopath and will continue to recommend her to anyone who is tired of doctors who just prescribe and wants a true professional who genuinely cares and wants to help. She has helped me immensely and if you are looking for a homeopath you have found her! Thank you for your help Tatiana, I would not be the person I am today if it were not for your knowledge and skill set!”

Ratemds.com, Calgary
“Taking into account that our child was frequently catching cold and that each time he had to take antibiotics, being two years of age, I told myself if we are going to continue like that, we will not go far. Then I decided to try homeopathy. I was amused and
…
pleasantly surprised to find out that this treatment really worked! We were lucky to have met Tatiana Savciuc, an exceptional homeopath, an outstanding specialist, to whom we owe thousands of thanks and who consulted and keeps consulting us whenever we call her, regardless of the time and day. We have been undergoing the prescribed homeopathic treatments for about three years now, and we are very happy with the results. I can say for sure that I have gained trust in homeopathy! I am very pleased that I made the right choice!”

Ratemds.com, Calgary
“Homeopathy gave me confidence and hope that I can treat without causing harm. When I lost hope of finding an effective and harmless remedy for my child who did not get out of bronchitis, pneumonia and pancreatitis because of antibiotic use, only the homeopathic treatment helped us. It is pity
…
that this outstanding opportunity to treat diseases with homeopathic remedies does not become the first treatment method of all doctors, that the amazing results of homeopathic remedies are hidden from the public and that the allopathic doctors promote the interests of pharmaceutical companies and are not interested in finding the truth about the efficiency of homeopathy.”

DN // Germany
The wealth of knowledge and experience Dr. Tatiana Savciuc brings to her clients is extraordinary. She is a Classical Homeopath and Doctor of Acupuncture, and holds a European Medical Doctor degree. With a holistic approach to my health concerns, Dr. Tatiana provides me with the best homeopathic treatment plan complemented
…
with acupuncture sessions. While my physician gave me no hope in treating my problem, Dr. Tatiana showed care and excitement in methodically and diligently investigating the causes and symptoms and prescribed the precise homeopathic remedies and treatment schedule that I needed for healing. I am very happy to have met Dr. Tatiana Savciuc, and I don’t have enough words to express my gratitude for her kindness and dedication.